27 Sep The Health Effects of the Sun-Drenched Turmeric Spice 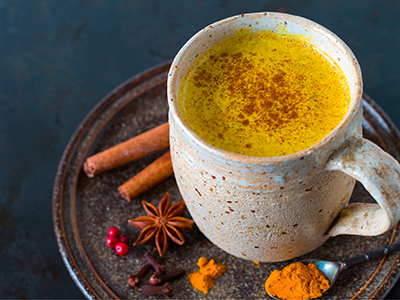 This sunlight-coloured spice has been used for over four millennia in the Indian subcontinent, a staple spice in the Vedic culture in India, not only for its ability to produce vibrant and delicious food, but also because of turmeric’s (or haldi in Hindi) extensive list of medicinal achievements. With its potent antioxidant and anti-inflammatory properties, turmeric is used in various ways. Turmeric is used in cooking, in Indian medicinal home remedies, in Hindu rituals, in skin products, and more recently, has appeared in turmeric lattes around the country.

Turmeric lattes, often promoted as a soothing, nourishing, caffeine-free hot drink, have formed their own cult following as a healthy alternative to coffee. That being said, ‘Golden Milk’, or Haldi Doodh, has been a comforting, immune-boosting home remedy in the South Asian region for centuries, often given to sick children or adults and pregnant women. Haldi Doodh is traditionally made by warming up cow’s milk with (fresh or powdered) turmeric and other spices, such as cinnamon and ginger, as well as the all-important black pepper, which helps our bodies absorb all the goodness to be found within this vivid, ochre-coloured spice.

“One Who is Victorious Over Diseases”

Turmeric, after years of anonymity in the Western world despite being beloved in South Asia, has recently become the centre of much scientific research to unearth the full extent of turmeric’s health benefits. Curcumin, a compound found within turmeric which gives it its bright hue, receives the most adulation for its impressive antioxidant and anti-inflammatory powers, powers which are responsible for turmeric’s never-ending health benefits. Antioxidants are compounds that fight cell damage and are therefore essential for the functioning of our cells. It has been proven that a diet rich in antioxidants may help to lower the risk of disease.

Moreover, chronic, low-level inflammation is thought to play a major role in almost every chronic, Western disease , including cancer, Alzheimer’s, diabetes, rheumatoid arthritis, osteoarthritis and heart disease. Therefore, diets rich in anti-inflammatory compounds, like Curcumin, are of potential importance in preventing, and even treating, these diseases. Turmeric appears to live up to one of its many Ayurvedic names, Jayanti, meaning “one who is victorious over diseases”. 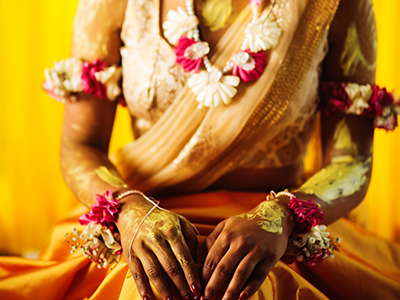 In addition to all the health benefits explored above, turmeric plays an auspicious role in Hindu wedding ceremonies and rituals, signifying purity, fertility and good health. Interestingly, turmeric is also highly beneficial for your skin. During the pithi, or the haldi ceremony, which marks the beginning of the wedding rituals, the bride and groom are surrounded by their family and are covered in a turmeric-infused paste. Once the turmeric is washed away, the couple’s skin is left ‘glowing’ in health, an old Indian beauty treatment that ensures the couple look radiant and wonderful on their wedding day. Just like any effective exfoliating agent, turmeric removes all the dead skin cells to reveal rejuvenated skin. Furthermore, turmeric is thought to work as a mild anti-depressant, and so when massaged into the skin, acts to relax the body, and ease any wedding day anxiety and jitters. 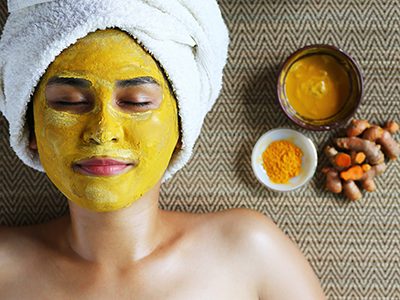 Turmeric has recently become an important ingredient for Western self-care routines, with its ability to produce a natural glow on our skin becoming more well-known through an abundance of face masks containing this special spice. As an exfoliant, turmeric is said to reduce the appearance of dark circles under the eyes, as well as acting to sooth any dry skin you may have. Turmeric’s strong antioxidant quality has also found to improve damage to the skin caused by the sun, as well as the ability to slow the effects of ageing on the skin.

There has also been further research into the effects of turmeric in alleviating skin conditions, such as psoriasis and acne, as well as relieving the appearance of acne scars or stretch marks, because of its powerful anti-inflammatory characteristic. Although there are still not enough studies to provide conclusive evidence on whether turmeric is effective in tackling skin conditions, interest in such studies is increasing.

As you can see, turmeric has an impressive repertoire in terms of making us healthier and helping us keep our skin healthy as well!

We would love to hear from you.

Leave your comments below and post via the Facebook icon to keep up to date with what others are saying too.

Sorry, the comment form is closed at this time.

We use cookies on our website to give you the most relevant experience by remembering your preferences and repeat visits. By clicking “Accept All”, you consent to the use of ALL the cookies. However, you may visit "Cookie Settings" to provide a controlled consent.
Cookie SettingsAccept All
Manage consent

This website uses cookies to improve your experience while you navigate through the website. Out of these, the cookies that are categorized as necessary are stored on your browser as they are essential for the working of basic functionalities of the website. We also use third-party cookies that help us analyze and understand how you use this website. These cookies will be stored in your browser only with your consent. You also have the option to opt-out of these cookies. But opting out of some of these cookies may affect your browsing experience.
Necessary Always Enabled

Performance cookies are used to understand and analyze the key performance indexes of the website which helps in delivering a better user experience for the visitors.

Analytical cookies are used to understand how visitors interact with the website. These cookies help provide information on metrics the number of visitors, bounce rate, traffic source, etc.

Advertisement cookies are used to provide visitors with relevant ads and marketing campaigns. These cookies track visitors across websites and collect information to provide customized ads.

Other uncategorized cookies are those that are being analyzed and have not been classified into a category as yet.

References used throughout this website are on file. If you would like a particular reference please email us at [email protected] stating exactly which section the reference relates to and the reason that you require it and we will be in touch

The situation with the outbreak of Coronavirus is rapidly evolving daily and Fontus Health are closely monitoring it and following the latest guidance from UK authorities and WHO (World Health Organization).

Our top priorities are the welfare of our employees and ensuring the continuity of service for our customers.

In line with guidance from the UK Government on the prevention of the spread of viral infections, so as to protect our team as much as possible we will be implementing working from home wherever plausible for staff and will be using remote working tools widely to enable our team to continue business as usual.

We are also in regular contact with our suppliers and service providers, to ensure that service levels are maintained.

We thank you in advance for your understanding at this time.